An update on the South African Storm, the last mention stated that the deaths were up to 250, currently, they are up to 306 in the city of Durban, South Africa. This storm is in fact the deadliest storm South Africa has ever seen. As the heaviest rains in 60 years pummelled Durban’s municipality, hillsides have washed away, homes and buildings have collapsed, and more people and more and more people went missing. What was spoken in the last mention of this storm is definitely true, Global warming and storms such as this in South Africa really do pose an impending threat towards less developed countries and they must receive help in becoming more prepared for such events in the future. 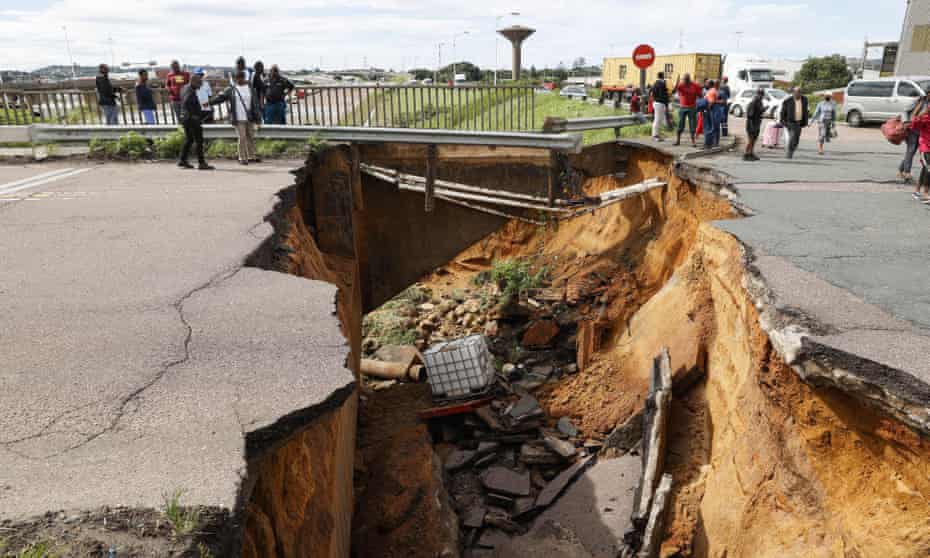 For the past several days, heavy rains have soaked the areas surrounding Durban, South Africa. Some areas have received more than a foot of rain in the past 24 hours, which is much higher than the 3 inches Durban usually receives in the entire month of April. More than a dozen people have died from the resulting floods. Several roads in Durban have been shut down to either high water or that the roads have been partially or completely washed away. Mudslides that resulted from the heavy rains have washed away several homes. Rescue teams continue to look for survivors. The flooding and mudslides even caused electricity and water treatment plants to shut down or go offline, leaving thousands without power or water.

On April 07, 2022, the municipality of Abriaqui, Colombia experienced heavy rainfalls causing major floods and landslides in the area. About 12 people were killed and 10 were injured after the incident. Families were required to evacuate and roads affected, were blocked off. Across other big cities such as La Quiebra, Medellín and Bello, homes were damaged and destroyed. Many residents are still managing to recover from the major destruction done in the country.

Last Monday (04/04), a British father and son (aged 9) died from falling rocks in a landslide in the Blue Mountains near Sydney and a woman and her son (14) were seriously injured. The woman’s teenage daughter witnessed the landslide and notified emergency services, she was subsequently treated for shock. The East Coast of Australia has been experiencing heavy spouts of rain over the past few weeks but the Wentworth Falls, where these families were hiking – was deemed safe. According to NSW National Parks and Wildlife Service, many areas around Wentworth Falls were closed off due to flood damage and ongoing rockfall risk. The area is now closed off to the public and the New South Wales Department of Environment and Heritage are looking into whether the area should have been open given the heavy rain.

On April 2, 2022, heavy rains caused mudslides that killed at least 14 people in the southern coastal cities and the Baixada Fluminense area of Rio de Janeiro state. The mudslides blocked streets and left entire neighborhoods without electricity. The colonial coastal town that is a tourist attraction was also left without electricity. The country experienced 2 days of rains which caused the streets to also flood. Streets were turned into rivers in several cities. The flood also swept up cars. As a result of climate change, this tragedy is pretty common in the rainy seasons, especially in less fortunate areas. Experts say as the hotter atmosphere holds more water, global warming increases the risk and intensity of flooding from extreme rainfall. The federal government has sent military aircrafts to help with the local rescue effort.

On the night of Thursday, March 31, Rio de Janiero began experiencing record-breaking rainfall. The rains lasted from Thursday through Saturday, April 2, and Paraty, a coastal city in Rio de Janiero, received 322 millimeters of rain, which is its six-month rainfall average. In just 48 hours, the Rio de Janiero mainland received twice that, totaling at 655 millimeters of rain. Resulting floods and landslides have caused the deaths of many people across the state’s affected municipalities, with the total rising to 18 dead as of Tuesday, April 4. Over 70 families have been displaced, with over 200 total families being affected. The local government declared a State of Public Calamity on Saturday, which, as of Monday, the federal government recognized in order to send aid to the affected areas more quickly.

On March 16th a deadly earthquake struck Fukushima in Northern Japan, the same region devastated by the 2011 earthquake and tsunami. In comparison Wednesdays quake had a magnitude of 7.4 in comparison to 2011’s 9.1. Although tragic, Wednesdays death toll stands at 4 people and a tsunami wave height of 8 inches as compared to 22,000 killed in 2011 and 30 foot high tsunami waves. This is in spite of the two quakes epicentres being within 55 miles of each other.

Disruption however was far spread, 78 people where trapped in a derailed bullet train In Fukushima having to wait hours for rescue. The Japanese meteorological society has also issued mudslide alerts in the region. However more disruptive is the 6 Thermal power plants that have been taken out of operation, some with damage that could leave them idle for months. The national government is calling for people to cut back on power consumption warning of power cuts and blackouts similar to those that followed the Wednesday quake. However temperatures have been recorded as low as 2 degrees celsius in Tokyo placing an increasing pressure on the limited power grid.

On Thursday, March 17, 2022, a warning for landslides and avalanches was issued in Sør-Troms and northern parts of Nordland. On Saturday they expect the areas of Salten, Ofoten , Vesterålen, and Sør-Troms to get 80-120 millimeters of rain. which can possibly lead to surface water in densely populated areas, as well as closed roads. With the rain, there is also a risk of landslides, mudslides, and floods, which will cause a reduction in road accessibility.

A landslide occurred in the capital of Ecuador causing 24 deaths and the destructions of a couple of homes. Many individuals were in their homes and had to evacuated very quickly when they heard the rocks begin to fall. The landslide comes after days of rain creating the mudslide. Authorities are trying to do clean up and rescue missions for those who are still missing.