According to a new study by MBARI researchers, they have provided the first evidence of how the thawing of permafrost, submerged underwater at the edge of the Arctic Ocean, is affecting the seafloor “We know that big changes are happening across the Arctic landscape, but this is the first time we’ve been able to deploy technology to see that changes are happening offshore too… this groundbreaking research has revealed how the thawing of submarine permafrost can be detected, and then monitored once baselines are established.”

On March 16th a deadly earthquake struck Fukushima in Northern Japan, the same region devastated by the 2011 earthquake and tsunami. In comparison Wednesdays quake had a magnitude of 7.4 in comparison to 2011’s 9.1. Although tragic, Wednesdays death toll stands at 4 people and a tsunami wave height of 8 inches as compared to 22,000 killed in 2011 and 30 foot high tsunami waves. This is in spite of the two quakes epicentres being within 55 miles of each other.

Disruption however was far spread, 78 people where trapped in a derailed bullet train In Fukushima having to wait hours for rescue. The Japanese meteorological society has also issued mudslide alerts in the region. However more disruptive is the 6 Thermal power plants that have been taken out of operation, some with damage that could leave them idle for months. The national government is calling for people to cut back on power consumption warning of power cuts and blackouts similar to those that followed the Wednesday quake. However temperatures have been recorded as low as 2 degrees celsius in Tokyo placing an increasing pressure on the limited power grid.

Coastal flood advisories have been issued along the New Jersey coast and also for Delaware Bay from 6 p.m. through midnight Tuesday for widespread minor tidal flooding. Easterly winds blowing off the ocean with what the article says new moon, together make a flooding situation. The Tuesday high tide is looking to be problematic for the flooding. Rain on Tuesday with the easterly winds of more than 30 mph also threaten to cause m ore severe flooding. 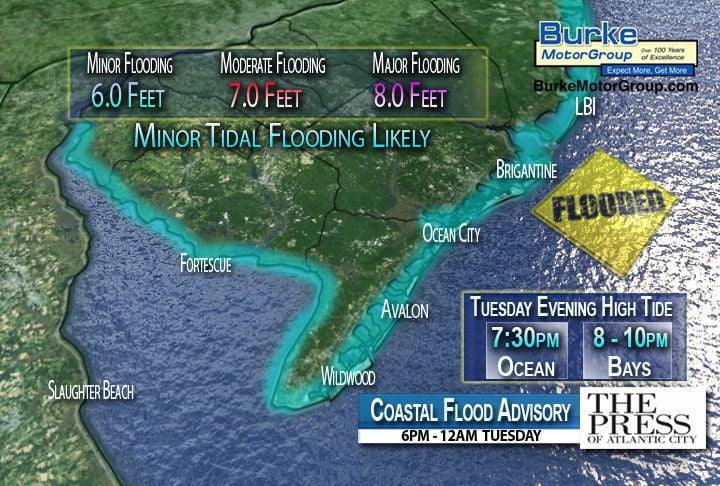 Cyclone Debbie, a level four cyclone, caused tragedy and destruction in Queensland, Australia. The residents of Queensland were told to get out as fast as they can, as it was said to be the biggest flood to hit Rockhampton in over sixty years. Debbie was not the most damaging cyclone that has ever hit the Australian coast, but it was one of the largest.

Those who had decided to stay, lost power and running water for three whole days. Debbie created disaster zones across an 870-mile stretch of eastern Australia to the south and there were gusts of wind that were at 163 mph.

Bowen, Proserpine and the Whitsundays were the parts of Queensland that were hit the hardest. Roads we’re flooded, the weather was absolutely terrible and  power and phone networks were damaged. There were no immediate deaths but there have been two victims that were found dead in flood water.

The storm also damaged a multitude of properties, making about 270 uninhabitable.

Declared a catastrophe, the total cost of Debbie has been estimated to be more than one billion, as well as the sugar cane industry to receive a huge financial blow.

By destroying buildings and homes,  inlander Kerry Cowan said: “Everyone is in such desperate need for fuel and water. They’re all getting so low on everything now.” Category 4 storm Cyclone Debbie is currently heading towards Australia’s northeastern Queensland coast. Residents of low-lying coastal areas in the storm’s path were urged to evacuate before it became too late, and an estimated 3,500 people have already left. The storm was expected to escalate to Category 5 status by its projected landfall Tuesday morning. Already, one death has been tied to the storm. Officials report that Debbie is the largest of its kind since 2011 Cyclone Yasi. Officials fear widespread flooding and extremely high winds powerful enough to blow cars away.

“United States Geological Survey recorded a 5.5 magnitude earthquake 11 miles north of Rota and at a depth of 104.5 kilometers at 6:49 p.m. Chamorro Standard Time.

No reports of injuries or damages from this earthquake have been recorded, according to Jenna Gaminde, public information officer for Guam Homeland Security.

Residents are advised to conduct the “Drop, Cover and Hold On” procedure when an earthquake happens, she added.

According to Guam Power Authority Spokesman Art Perez, no circuits were lost after the earthquake.” Early Saturday morning four people were injured by a minor earthquake that hit Taiwan. This was a great victory for the country, as they have been working on improving their safety conditions. One year ago a magnitude 6.4 earthquake destroyed a 16-story apartment and killed 115 people. This incident contributed to to stricter safety and building regulations.

The Saturday morning earthquake was a magnitude 5.6 and hit near the coast of Tainan city around 1:12 a.m. News sources reported over 50,000 homes were affected by a brief power outage. Fortunately there were no deaths reported as a result of this incident.

The Chesapeake Bay  Bridge Tunnel has seen its share of accidents, but Thursday, February 9, 2017 saw a tractor-trailer plunge into the Bay.  Despite a quick rescue by the U.S. Navy, the driver died in transit to the hospital.  The crash is under investigation following travel restrictions on the Bridge Tunnel due to winds in excess of 60mph in the area.

A series of violent storms are currently battering the coasts of France and Spain. This has resulted in loss of power in areas and damage to infrastructure. As of yesterday, 250,000 homes have been left without electricity in southwest France, while the Atlantic coastline in Portugal, northern Spain and France have been experiencing storm-driven waves and high winds of around 150 km/hr. Damage to a stadium’s roof in Spain caused the postponement of a futbol match. The pictures in the article show high waves hitting the shoreline and the damaging effects of high winds. Read the Al Jazeera story here.