Upon rapidly moving northeast over the Bay of Bengal, Cyclone Bhola slammed into East Pakistan (modern day Bangladesh) on the evening of November 12th, 1970, with the strength equivalency of a category three hurricane. The power of this cyclone, combined with an abnormally high lunar tide, created a storm surge higher than 5 meters that ravaged the nation’s low-lying coastal region that only averaged 2-8 meters above sea level in elevation.  Economic damages are estimated at 86.4 million United States dollars (over $500 million today after inflation markup); additionally, conservative death tolls report approximately 300,000 lives lost.  The fishing sector of the economy was hit particularly hard.  Analysis after the storm revealed that 46,000 fishermen out of the estimated 77,000 routinely operating in the coastal region were killed while roughly 65 percent of the region’s total annual fishing capacity was destroyed.  Cyclone Bhola dissipated the following day on November 13th, 1970.  The high loss of life is attributed to a severe lack of public awareness that resulted from governing officials not placing an emphasis on disaster mitigation and preparation.  Nine years prior to Bhola, the director of the United States Weather Bureau’s Hurricane Warning Center even authored a thoroughly comprehensive mitigation plan for the region, but it was largely overlooked.

Below is footage compiled in the disaster zone after the cyclone had dissipated.  It highlights the mundanity of the initial relief effort and shows how survivors lived in the months after Bhola. The Federal Emergency Management Agency has come to the aid of Florida at the request of Governor Rick Scott since Forest Service crews started battling 32+ wildfires across the state.  Three wildfires have been particularly damaging so far.  Authorities evacuated about 800 homes during Polk County’s Red Grange wildfire, about 2,000 homes during Lee County’s Ann Avenue wildfire and about 6,000 homes during Collier County’s Frangipani wildfire.  Collier County has already been reported on by a classmate, but I wanted to highlight that fires are rampant in Florida this month.  The map below details the locations of wildfires currently burning. A map detailing the location of wildfires being fought by Forest service crews across the state of Florida.

Upended roads slid a home into a riverbank and created additional mudslides as what is described as the “worst flooding in decades” hit Ferry County in North East Washington.  According to local emergency responders, one man was able to maneuver his vehicle around one of the upended roads and crashed into the yard of nearby home.  Severe injuries seem minimal and no deaths have been reported.  Damage to county infrastructure, especially roadways, is still being assessed. Highway 395 in Ferry County, Washington. This is one of many roads to wash out as a heavy flooding season begins.

The government of Zimbabwe said that 246 people have died, 128 were injured and approximately 1 985 made homeless after above-normal rains flooded the country. Regions now affected by floods have recently suffered from severe drought which left more than 4 million in need of food aid.  President Robert Mugabe declared floods to be a national disaster this week and appealed to international donors for $100 million to help those affected by floods, which caused loss of human lives, destroyed homes and public infrastructure such as roads, bridges, dams, schools and hospitals, killed livestock and destroyed crops.

A Bridge along the Mwenezi River sustained major damage from flood waters in Masvingo Province.

A shallow Magnitude 5.9 earthquake hit Surigao del Norte, Philippines at 00:08 UTC (08:08 PHT) on March 5, 2017. The quake struck at a depth of 13 km (8 miles), according to the Philippine Institute of Volcanology and Seismology (PHIVOLCS). The agency said the tremor was an aftershock of the magnitude-6.7 quake that hit Surigao on February 10.  Hospitals reported some 29 people were injured, most of them had only minor wounds such as lacerations and abrasions. 24 of them were released home. One elderly woman reportedly died of a heart attack from the quake, but officials are yet to confirm this.

More than a dozen wildfires have erupted in Chile this week, scorching approximately 123,500 acres of land.   President Bachelet has “instructed the Interior Ministry to declare a catastrophe zone and a state of emergency in the areas affected by the fires”.  CONAF, Chile’s Forestry Service, is reporting that most of the blazes were started by humans though it is not clear if any were intentional.  National Park land in the area has been closed to the public all weekend. 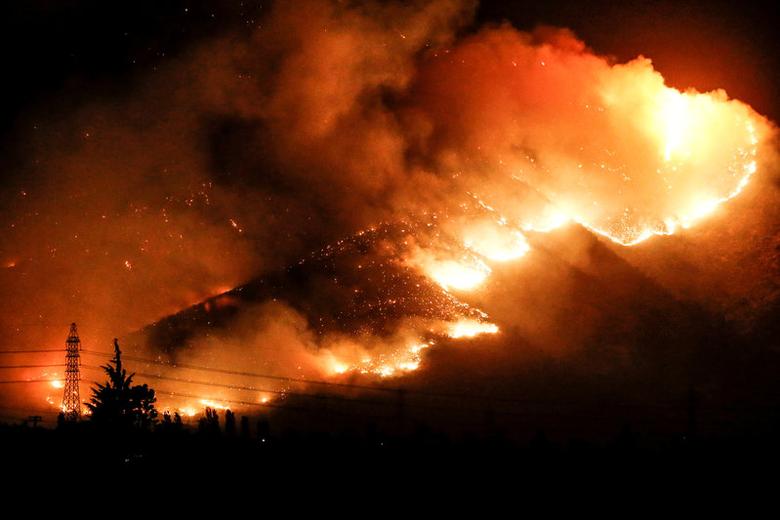 Fire is seen on a hill in a town called Pirque, on the outskirts of Santiago, Chile January 20, 2017. Photo reuters.