The strong 6.9 magnitude earthquake hit about 85 miles off the west coast of Chile on Monday, April 24.  Fortunately, the “quake-prone” nation was spared from any damage.  Although the epicenter of the earthquake was quite far from land, its focus was quite shallow, thus allowing it to be felt hundred of miles away.  If this earthquake had been closer to land, the 6.9 magnitude could have been responsible for much more sever damage.

The nations tsunami alarm even sounded during the earthquake since the quake hit out at sea.  At one clinic just north of Valparaiso, “people ran from the facility carrying children” and some of them headed for the hills to be above sea level if a tsunami did hit.  Officials soon cancelled the tsunami warning.

There were no reports of structural damage, but some cellphone networks were down.

This is the second time this month that a landslide has fallen over the 101 Freeway in California, this one being in Mendocino County.  Road crews were working at the time of the landslide and they had to quickly escape to the bottom of the hillside as sediment and rocks fell onto the road.  A concrete barrier used for the roadside work was also knocked over by the falling rocks, causing the freeway to shut down.

According to the California Department of Transportation, the landslide was “sporadically active” throughout the day and that the area was “prone to rock slides.”  The fact that the area is more likely to continue having landslides inhibits the ability for crews to move in and clean up the incident.  The highway remained closed until all the rocks were removed. 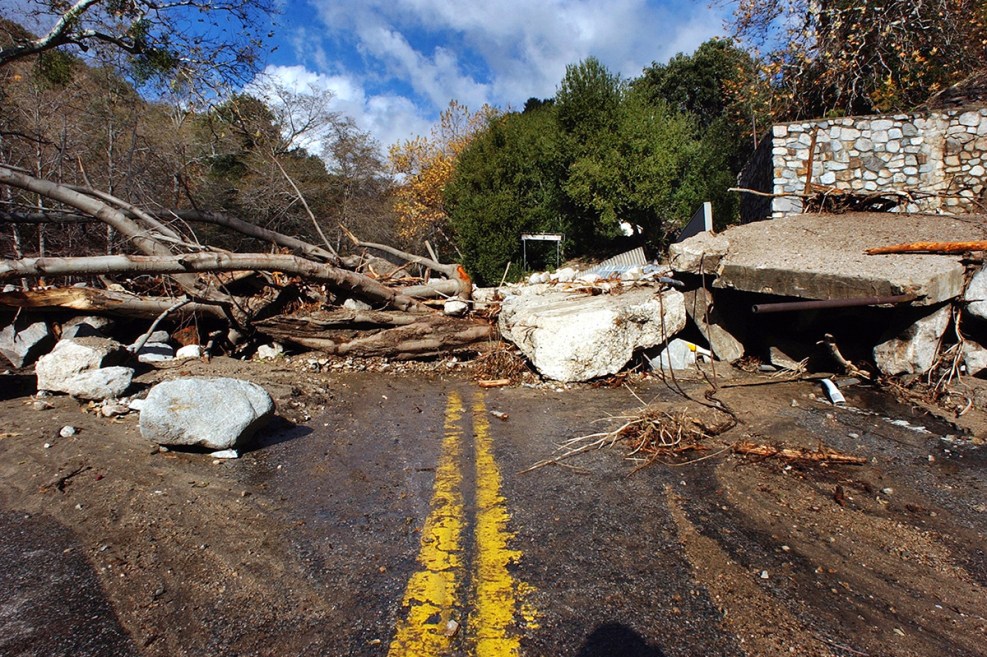 Sydney, Australia saw its average rainfall for the entirety of February in a single hour this year.  Brisbane was flooded this March by Cyclone Debbie.  This month, Melbourne’s average monthly rainfall fell in a single day.  As the world’s climate continues to change, we can expect to see more of these “extreme weather events.”

According to “Intense Rainfall and Flooding: The Influence of Climate Change” by the Climate Council, “Bushfires, drought, heatwaves, storms, and extreme wind will be expected to become more frequent.”  Australia’s heatwaves are already lasting longer and reaching hotter temperature highs and the Center of Excellence for Climate System Science’s research shows that Sydney’s summer heatwaves are already starting 19 days earlier.  An intense heatwave in Victoria and Southern Australia during 2009 killed 432 people, 23 people drowned in the Queensland floods of 2011, and another 8 people died after a city-wide “asthma event” which was triggered by a freak thunderstorm during November of 2016 in Melbourne.  In fact, heat extremes for 2030 are already being predicted since the number of heatwave days have a;ready doubled over the last 30 years.  “The hottest day of their heat wave is 4.5 degrees hotter than it used to be,” says Amanda McKenzie, the CEO of the Climate Council.

I think it’s interesting that this article concludes with the statement – “We need to make sure we have a clear idea about what the changing climate will mean, and that we’re ensuring that our infrastructure is prepared, our emergency services are prepared, and communities are prepared too.”  We’ve talked so much in class about how government can protect its people from natural hazards so I’m eager to see what mitigation will be put into place to protect the region.  I also want to see how Australia’s government will react to the incoming of extreme weather events as its climate continues to change, and how the people can prepare for such event. Strong winds have made it difficult for firefighters to get Arizona’s Sawmill wildfire under control.  Residents of the small town Sonoita have been ordered to evacuate as the fire burns through the Santa Rita Mountains.  “As we were evacuating, the fire jumped the road right as my family was crossing,” Green Valley Fire District Chief Chuck Wunder told KGUN.

About 300 fire personnel are battling the fire, which was 7 percent contained as of yesterday afternoon; those said 300 includes five hotshot crews, 20 fire engines, five air tankers and three helicopters.  Winds were gusting at up to 45 mph with low humidity and another round of strong winds is expected with a new storm on Friday, although no rain is expected.

The Green Valley area has seen only about 25% of its average precipitation since February 1st and along with the low humidity have created the perfect the “perfect” conditions for a wildfire.  “It only takes a cigarette flicked out of a moving vehicle” to start a fire in such weather, says a Green Valley Fire Department spokesperson. (Another great reason not to smoke cigarettes!)

Unusually warm temperatures are expected throughout the Ohio Valley, Mid-Atlantic, and Northeast in the remaining days of April as they reach into the high 80’s.  Some cities may be 10 – 20 degrees (F) above average for this time of year, and Washington DC and Philadelphia could record their first 90 degree day of the year already.  A northward “bulge” in the jet stream is the cause for this unusual warmth

In the western mountains, residents will be experiencing snow, especially in Colorado, Wyoming and northern New Mexico.  Although it is not uncommon for Colorado to have snow during April (usually accumulates about 7 inches during the month of April), the state has only gotten 0.1 inches so far, so the incoming 7 inches will be a lot to handle in the next couple days.

Severe thunderstorms are forecast along Central and Southeast for the weekend and heavy rain may potentially lead to flooding in the Central Plains and Midwest.

Today, April 25th, 2017, torrential rain triggered widespread flash flooding that swamped homes and businesses, shut down roads and stranded vehicles.  Over 100 roads are officially closed off across the state; some of them were reopened by the afternoon.  Crabtree Creek was among the hardest hit areas, which accumulated over 17 feet of water since Monday morning.  Students of Vernon Malone Career and College Academy and Southeast Raleigh High School were evacuated by 10:00 AM.  About 2,700 Duke Energy customers are without electricity according to the Associated Press.

This flash flood has has rainfall which exceeded that of Hurricane Matthew In early October of 2016 for the Raleigh metro area.  The rain was supposed to end by late Tuesday, as the low-pressure system moves up the East Coast.

A dangerous heat wave has been occupying India with no relief expected until the seasonal monsoons arrive, usually beginning in June.  Northern India from West Bengal  to Rajasthan will experience the highest heat and daily temperatures will approach or exceed 110 degrees Fahrenheit/43 degrees Celsius.  Temperatures are expected to continue increasing through the rest of the week and will remain well above normal through the next week.

Although heat waves are common events in India, this event is particularly worrisome due to its unusually early occurrence and persistence.  Several millions or citizens and animals are at risk for dehydration, heat exhaustion, and/or heat stroke.

Even though the summer monsoons will arrive to Southern India in early June, they will not reach northern India until late June or early July; so the portion of the country that’s receiving the worst of the heat will continue to have brutal heat for quite some time.

The U.S. Drought Monitor shows that 34% of the state of Florida is experiencing a drought and it has been intensifying as of the last week.  Over 100 wildfires have burned up to 20,000 acres across the state.  One wildfire known as the Cowbell Fire, began March 30 and as of April 13th was 47% contained and has burned over 26 square miles.  Federal officials have banned campfires and charcoal grilling in the Okefenokee National Wildlife Refuge, where a fire burned 13 square miles.

According to meteorologist Linda Lam, “these abnormally dry conditions combined with gusty winds add to the risk of wildfires spreading.”  This has been the state’s most active wildfire season since 2011.  Wildfires are known to occur any time of year in Florida, however, they are usually significantly more active in the late winter and spring months when rain is less frequent and the air is less humid according to meteorologist Chris Dolce.

For the first time in its history, California’s Oroville Dam was damaged yesterday, February 12th, and nearly 200,000 local residents were ordered to evacuate.  Since California has gotten over 200% more rainfall than usual during the past year, water was overflowing from the spillways.  The Oroville Dam is the tallest dam in the nation, and even its structures meant to hold the overflow could not contain the excess water.  The crisis is considered stabilized for the moment as the water flow over the spillways stopped yesterday evening; however, with storms being forecast in the upcoming week, officials warn the structure could by further damaged and are unsure of when residents should be able to return to their homes. 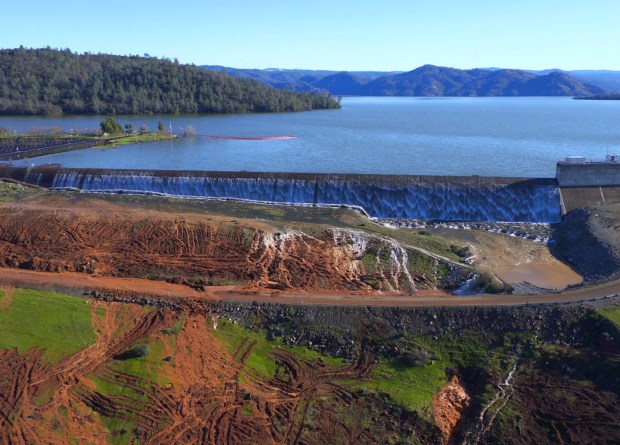 A large winter storm hit most of the Central US over January 14th and 15th, 2017.  The winter storm, called “Jupiter,” caused widespread freezing rain over Oklahoma, Kansas, Missouri, and Iowa.  Snow was forecast north of the fallen freezing rain, and heavy rain to the south as well as potentially sever thunderstorms.  As of Sunday, January 15th, the death toll was at 6 and all of them occured on roads from weather related accidents.  Several thousands experienced power outages althought millions could have potentially been affected. 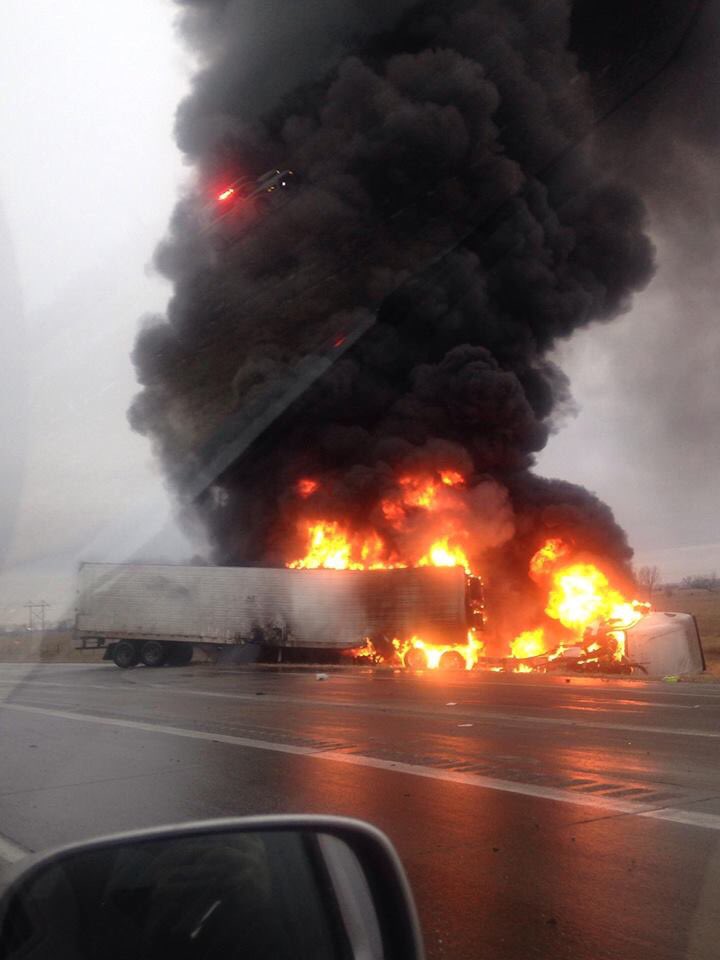