I chose to write about the 1980 eruption of Mount St. Helens. In my senior year of high school I did a small GIS project on the Oso mudslides of 2013/2014. During that project I found that an overarching factor in those mudslides and their severity was due to the 1980 eruption, and since then I’ve always wanted to know more about it! On May 18, 1980 at approximately 8:32 am, Mount St. Helens erupted for the first time in over a hundred years. After a series of small earthquakes that started two months prior, that led to landslides that led to flooding that finally led to the eruption. Though it was closely monitored by geologists and volcanologists, Helens took everyone by surprise.

The volcano blew from its side, instead of its top as most would suspect. The result was an incredibly large cloud of ash that encompassed almost three states around Washington. Since the USGS had watched Helens closely for the two months since the earthquakes started, they were relatively quick to act and clean up and work with the state and federal governments to help the people of Skamania county and its surrounding areas. The death toll today stands at ~57 people.

Today, Helens’ elevation has decreased significantly as shown in the figure above, and is watched even closer now. Because 1980 was the first time it had erupted in over one hundred years, there were no disaster prevention plans in place for Washington state that dealt specifically with volcanoes. Helens, however, gave them a reason to devise a plan. Now, Congress annually funds different Volcano Observatory programs across the United States in hopes of preventing a repeat of 1980.

This morning, the National Weather Service confirmed that two tornadoes touched down in the DC Metro area yesterday afternoon.

One tornado hit my hometown of Herndon, Virginia at 1:36 p.m. while the other hit a few minutes later at Joint Base Anacostia-Bolling in Southeast D.C.

Both tornadoes were EF-0 with estimated peak winds at 60 to 70 miles per hour and there were no reported injuries from these tornadoes.

The weather service has confirmed that the tornado to hit Herndon was the first to hit in almost 15 years, saying that “The tornadoes were spawned by a line of northward-moving thunderstorms. Tornadoes that form from linear storms are generally weak and last on the order of only a couple of minutes.”

A system of storms battering the Southwestern United States is expected to put nearly 55 million people at risk of tornadoes and hail this week.

These storms are to travel through Alabama, Georgia and South Carolina before moving on to the Ohio and Tennessee valleys, expected in two waves: one in the morning and one in the late evening.

A CNN meteorologist, Jake Reed, has stated that this is “far and away the biggest threat Alabama has seen in quite some time.” while the Federal Aviation Administration has issued a ground stop to all flights originally scheduled to land at or depart from Hartsfield-Jackson Atlanta International Airport. Hail has already been reported in many of these areas and residents are being warned to take shelter until the storms have passed through.

Gina Redondo capturing hail ping pong sized hail in Ladonia moments ago. be safe and do not put yourself in harms way. #NextstarWX pic.twitter.com/JuhZrZuDoN

The Bureau of Meteorology have warned residents of Queensland, Australia over an incoming category 4 tropical Cyclone, Debbie. This storm is expected to hit them between Sunday and Tuesday night. Officials of Queensland have advised residents to begin making preparations for this storm, as the Bureau is predicting that it could possibly turn into a category 5, should the winds speed up any more.

The director of Queensland’s regional bureau has stated that “If the cyclone was to speed up, it could [cause] impacts on the coast as early as Sunday night. Alternatively it could slow down, but the problem with that is that the longer time over the warmer waters of the Coral Sea could see it turn into a category five, I can’t rule that out.”

Meteorologists have been tracking this low pressure system over the Coral Sea for the past few days and are warning citizens, especially those in remote areas, to begin immediate preparation for evacuation, while extra emergency efforts and services are being put on standby.

The deputy police commissioner, Steve Gollschewski has stated that “This could go on for some days because we’re not just talking about a cyclone with wind; we’re also talking about potential flooding where there could be isolation and the like.”

Australia’s tracking and monitoring have proved useful in providing a timely warning to residents living in areas in the path of the storm. This type of mitigation, should the storm hit a category 4 or 5, will undoubtedly protect the citizens of Queensland as well as help to contain the damage and loss usually associated with these types of extreme weather events.

Good for you, Australia!

A wildfire started along the 285 Highway on Wednesday around 3 pm, briefly closing the highway on both sides, stopping traffic for a few hours. This is the second wildfire in Jefferson County, Colorado this week. 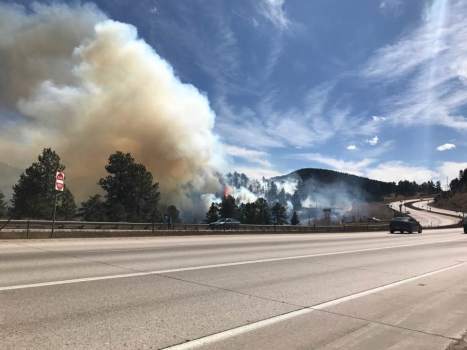 It is reported that one outbuilding and two cars were damaged in the fire. While no cause has been identified yet for the fire, it is not unusual for this time of year in Colorado. With rapid winds and warmer weather moving in, this marks the beginning of wildfire season for the state.

The local sheriff’s office provided a statement saying that the fires were “100 percent contained” by the several responding fire agencies.

A local reporter captured and tweeted this video of the smoke pouring towards the highway on Wednesday.

Pictures from our crew on scene at the fire on US 285. Both directions remain closed at North Turkey Creek due to fire. pic.twitter.com/s5ATvhRN8X

In a bout of unusually heavy rain in Lima, Peru at least a dozen people have been reported dead. Over the last three days, Peru has experienced intense rain and terrible mudslides. The Huaycoloro river has risen significantly and has swept away trucks and has put a bridge under risk of collapsing.

Authorities have cited El Niño as the reason for the heavy rain in this region. They have also counted 62 people dead due to the flooding and over 12,000 homes have been destroyed since it started.

Labeled as “Europe’s tallest and most active volcano”, Mt. Etna erupted yesterday, February 28, and is expected to last for the next several days. 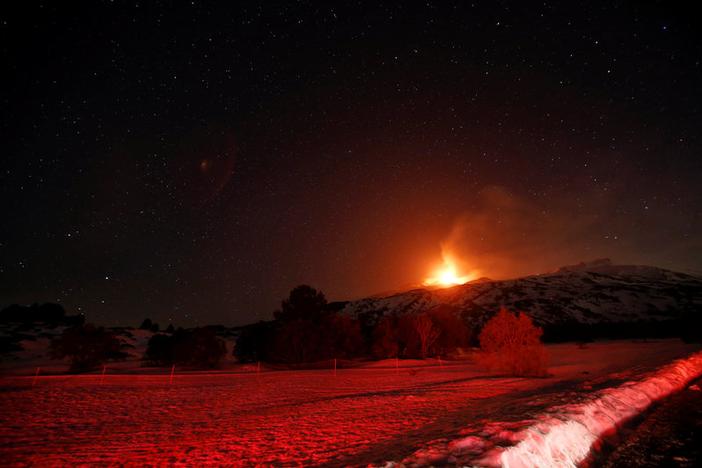 The eruption was described as having “lit up the night sky” over the island of Sicily. It has been mostly dormant for the last two years, but is noted as being able to “burst into action several times a year.” 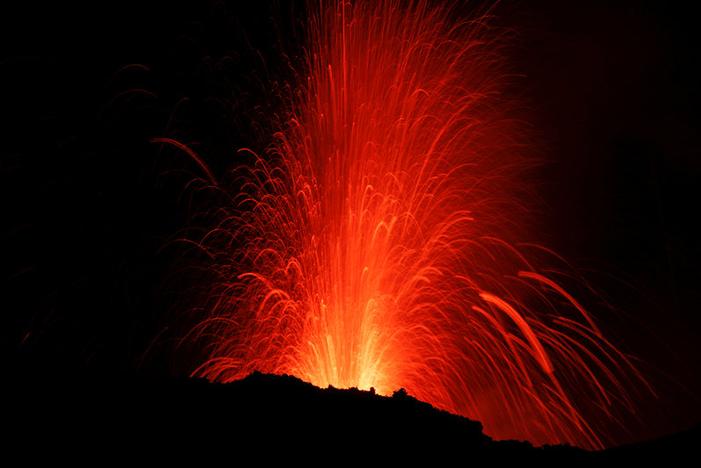 While the lava spill may last for several more days, it began to ease down early this morning. Authorities at the Catania airport, about 30 miles away from the volcano, are tracking the movement of the ash clouds produced by the eruption. 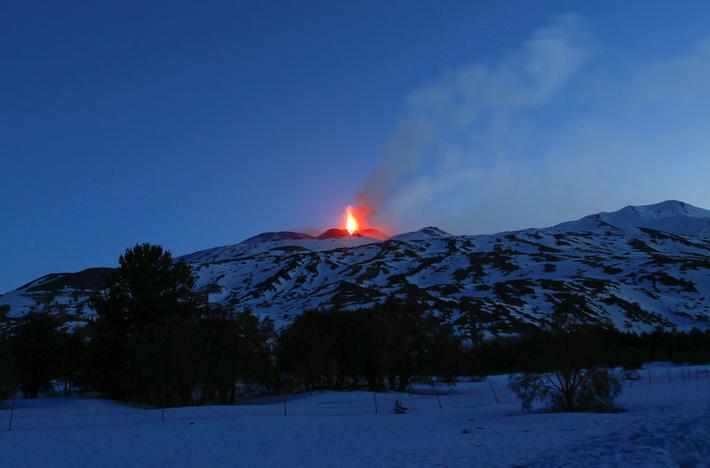 After severe storms hit San Antonio, Texas late Sunday night, more than 100 structures were damaged. In what meteorologists are calling a possible tornado, more than 40,000 people were left without power and nearly 20 homes were severely damaged.

Later today the National Weather Service will survey the area and decide whether this was the work of one large tornado or multiple tornadoes hitting San Antonio.

In a storm system that began early Tuesday morning, four storms hit Louisiana, most of the damage occurring in New Orleans. This supercell storm has now passed through and has revealed the widespread damage with dozens of reported injuries, but no deaths. Governor John Bel Edwards has declared a state of emergency for the state while the New Orleans Police Department is requesting any and all available officers to help with emergency response to the storm.

At about 3:30 pm local time Sunday (approximately 12:30 pm Saturday our time) an earthquake hit Papua New Guinea and was said to have been an 8.0 magnitude, but the USGS later downgraded it. Immediately following this event, the Bureau of Meteorology warned of a potential Tsunami threat caused by the large earthquake to the surrounding areas of Papua New Guinea which included the Solomon and Pacific Islands. Since the warning the threat has passed and the islands are now safe with no casualties to report, only extensive damage.