I did my case study on the 2005 La Conchita Landslide in California. In 2005 a landslide with over 400,000 tons of mud destroyed over 20 houses and killed ten people. Before this event happened there were fifteen days of huge amounts of rain. Due to this and the remobilization of the 1995 landslide, that also was caused because of the rain, the 2005 landslide was triggered and caused a lot of damage. The interesting thing is that the people were quite aware that there was a huge possibility that there would be another landslide before the one in 2005. Also there have been many landslides and mudslides over the past thousand years. In fact after the 1995 landslide happened, residents had to sign a waiver acknowledging that they know of the risk that comes with living there.

Although some of the residents moved after this event, many stayed. This is a small rural. community in the middle of the highway and the bluff (hill) that is right above the community. About 300 people live there and generations upon generations have lived there for many years. There are a couple of reasons the residents stayed. One was because of their socioeconomic status. This community is poorer than most. On top of that the properties decreased in price after the 1995 landslide so the people cannot afford to leave. However, the majority stay just because they are stubborn and refuse to move. Since their families have lived there forever, they do not want to leave even if it means risking their lives.

The recovery process was ineffective. Even though the emergency personnel advised the people to evacuate, they resisted and stayed. The county even asked for help from  Center for Robot-Assisted Search and Rescue at the University of South Florida to bring in robots to help with finding the people buried under the tons of mud. However, the robots failed miserably and were sent back to Florida. In addition to this, the recovery plan that was proposed estimated $150,000,000. The county could not afford that and had to fundraise money. However, the plan to stabilize the hill was never carried out and instead a few barriers, a drainage system, and a wall to prevent small amounts of land erosion sliding down the hill was installed. This only helps with minor hazards. If there is ever a landslide, and geologists predict there will be, it will crush the houses and destroy their property once again.

The people in their own ways have tried to prepare themselves for the aftermath of another possible landslide after the 2005 one by keeping a storage shed filled with emergency supplies such as generators, radios, lights, sleeping bags, etc. They decided that if another landslide hits and crushes everything then they will just start from scratch and start all over again. The county even bought a tractor to remove dirt off the roads if need be. The people consider themselves “prepared” any future landslides because they now know to call 911, evacuate and honk their horns when the disaster hits to let others know of it.

It is amazing to think that people will rather risk their lives by staying in an extremely hazardous place then considering evacuating if possible. 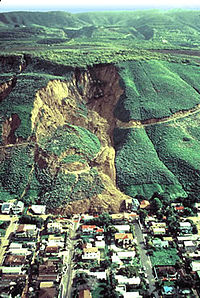 An earthquake with a 7.1 magnitude hit the west coast of Chile a couple of days ago. There was no immediate danger reported nor are there signs that there will be a tsunami. Originally, the authorities enforced an evacuation plan but later canceled it due to the Pacific Tsunami Warning Center saying that there will not be a tsunami. Yet, residents were still panicking. Although this is a major earthquake, the effects were tampered due to the fact that it hit the coast. Two aftershocks were reported: one with a magnitude of 5.0 and the other was a 5.4. Since the country runs along two tectonic borders, they are hit by huge earthquakes a lot.

Last week a strong cyclone struck New Zealand causing landslides, power outages and even tons of trees falling creating a lot of destruction. Many people abandoned their villages. Thankfully most followed the safety directions to get out of there as the villages were hit with huge waves from the shoreline. The civil defense staff immediately asked people to evacuate and closed schools and office buildings. There was even public transport for those trying to evacuate. Thousands upon thousands of homes lost electricity and there were huge amounts of wind. There was also a lot of flooding as a result and they declared a states of emergency in some of the cities.

Peru has been flooded several times this year and the results are devastating. Ten times the amount of rain, than what they are used to, has caused flooding and landslides. “More than 100 people have died, nearly 158,000 are displaced and 210,000 homes are damaged, according to Peru’s emergency operations centre. The country’s infrastructure took a big hit: 260 bridges collapsed and nearly 3,000km of roads are unusable, cutting off hundreds of villages and towns.” Peru is working on recovery since they have never experienced the rains at this scale. Not only is the infrastructure faulty but also most people are living on floodplains which puts them even more in danger. Nieto, who is leading the recovery effort, says that there are not any flood defenses and that the rivers need to be channeled. Nieto also advised that reservoirs need to be put in the mountains to store the rainwater. The reconstruction from the devastation of the floods will be enforced in 2 stages: the first stage will be paying for the immediate reconstruction of cities and towns and the second stage will be building infrastructure that is more modern to be able to deal with the floods in the future. However this phase will be longer than the first. Not only is Peru working on safety but also the United Nations is concerned for them. They highly suggested that they should adopt multi hazard warning systems and let the people know how much risk is involved with these disasters.

A few days ago a dry landslide obstructed the Chitwan road. It was reported that about a dozen cars were buried under the dirt and two people were killed. The two people that died on the way to the hospital were identified. Rana, a forty-five year old man was writing a motorbike when the landslide hit him and his son was also with him at the time. His son is receiving treatment at the hospital. The other person, Koiri, who died was an assistant driver. Another man was also found injured and is being treated at the hospital. It seems as if only 2 people were affected injury-wise since that is all that has been reported and now the the road has been cleaned up of the debris and traffic resumes.

Due to the huge amount of flooding and mudslides in Mocoa, water and debris crashed into the houses causing many damages, deaths and injuries. The rivers overflowed, due to the heavy rains, and because of the overflowing the water pushed sediments and rocks into the buildings and roads. The roads were covered in thick mud that stopped cars from being able to move and people had to evacuate their houses due to the damages. “The army said in a statement that 254 people were killed, 400 people had been injured and 200 were missing. More than 1,100 soldiers and police officers were called in to help dig people out in 17 affected neighborhoods.”  Although mudslides are common in that area due to the topography of the land, the common occurrence of heavy rains, and the way the buildings are built this was said to be one the most dangerous landslides in the history of Mocoa’s landslides.

Today an earthquake hit Lahad Datu. It is reported as a magnitude of 4.2. The earthquake with an 8km depth was also felt in Kunak, Tawau, Sandakan and other surrounding areas. There are not yet any reports if anyone has been injured however it was reported by Azmi Daud from the Sabah Meterological Department that it was a weak earthquake with the implication that there is no need to worry. At the beginning of this week, NSW had torrential thunderstorms that still have not stopped. Due to this, there has been flooding. The article said that 80 calls were made asking for help on Wednesday, mainly due to the leaking roofs, since there is so much rain. Also, four people were rescued last night. It is stated that since Sunday sixteen people have been saved. In the article it talks about the storm saying. “The week started with intense thunderstorms when an upper-level low-pressure system interacted with warm, moist air flowing in from the Tasman Sea. Severe storms produced damaging winds, flooding rain and large hail in parts of Queensland and NSW.” Some of the areas with the most amount of rain were from Taree to Cape Byron which were hit with 100mm in rain in a matter of 24hrs. Also the town of Sawtell which was hit with 250mm in 24hrs. It is predicted that the rain will continue through saturday.

Due to the storm, major cities have been shut down. Thousands of travelers are stuck in airports due to 6,000 flights that are cancelled and almost 2,000 more that are delayed. Before the winter storm even hit the Northeast, two people died in the Midwest. Virginia, Maryland, New York, and New Jersey declared states of emergency. Officials warn the people to stay off the roads. Public schools have been closed in many states including Virginia. Nearly 100,000 people have lost electricity. In fact about 50,000 of these people are Virginians. Presently, it is still snowing in the northeast- Maryland through Maine.

I live in Stafford and the roads are covered with slush that froze over.  The snowplows could not remove the ice so they salted it. However, it is still slushy on the roads and we cannot get out of the house until it starts warming up.

On February 10th, the heat wave broke records which greatly affected their electricity supply. The state government told people to reduce the amount of electricity they use, however, it did not work because there were still a bunch of supply failures. It was reported  yesterday that the Colongra gas-fired plant could not start up due to the low gas pressure, output was reduced from two coal-fired plants, thermal generators reduced their output, and solar and wind generation were also reduced by 300MW. Due to all of these factors, the system failed. In order to fix this problem the government decided to completely shut off the electricity for a couple of days. While the smelter’s pot-lines were shut off, there were workers that still had to work in this excruciating heat to get the electricity supplies to work. The smelter’s pot-lines were turned off for 75 minutes three times in order to save the plant’s equipment. Residents of Western Victoria were warned that they may have a few blackouts due to the pot-lines being shut down.