I chose to do a case study on the 2010 eruption of Mount Merapi, Indonesia. Before I chose this topic, I knew that I wanted my case study to be about a volcano eruption, because I have always thought they were super cool. After doing some research on volcano eruptions from the past, I came across Mount Merapi, which fascinated me with its stratovolcano shape and the fact is the most active volcano in Indonesia. After doing some more research I learned a lot more about it and it got more and more intriguing.

The eruption of Mount Merapi in 2010 was a level 4. It was caused by the subduction of the Indo-Australian plate underneath the Eurasian plate. The volcano stands on a destructive plate margin at a subduction zone, the Indo-Australian plate is dense, so it sank under the Eurasian plate edge which has a lower density. In turn, the temperature-pressure rises, rocks begin to release water, magma rises then, boom an eruption occurs.

The eruption left an aggrieved memory for the history of volcano eruptions in Indonesia. As a result of this event, a total of 353 people were killed and 577 people were injured. Residents were not very aware of this type of hazard or the risk they faced. Many Similar events had occurred before in this same location, yet that did not prepare the residents at all. A man whose family was a victim of the disaster states “After the 2010 tragedy, Merapi residents came to acknowledge they had lived alongside the 2,914m volcano for so long that they had become dangerously inured to its threat.” Also, many did not have the proper means to aid them in escaping this event. An example of this is of a family who during this eruption gave up on trying to escape and decided to remain at home and die together because they only had one motorbike that could not transport their family of six in a single trip. 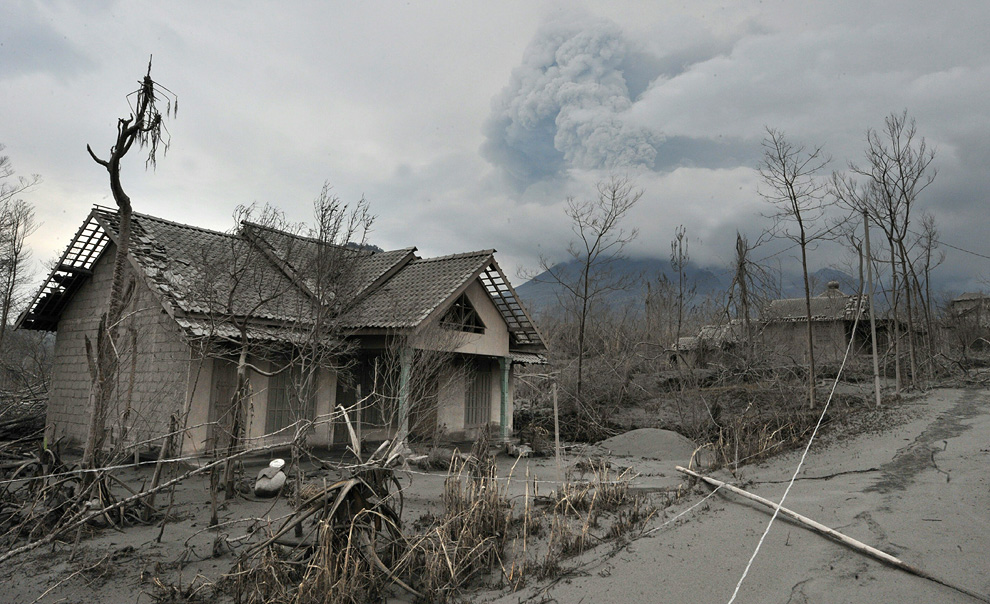 The whole event lasted for about one month and caused Volcanic bombs and heat clouds, spread over ten kilometers from Mount Merapi, Pyroclastic flows advanced three kilometers down the mountainsides which were greatly populated, ash traveled 30 km away and covered almost everything in its path like the village of Bronggang, all roads were completely jammed with people in their vehicles trying to escape the disaster, later heavy rain brought about lahars that traveled into towns and destroyed bridges.

Eventually, everything was restored and back to normal, and this time even better because this time they had better Roads and bridges for evacuation, dams built in valleys to block lahars, and A newly enhanced warning system. Also, the government and non-government groups in Indonesia started a variety of training sessions in communities to help people be more prepared and better at evacuating. After this recovery phase, the residents claimed that they became much more aware of the possible disasters around them and their risks. Suwarni, a woman who manages a gift shop on Mount Merapi said, “Now, even if there is a small sign of some activity from the volcano, people react quickly.”