An EF-2 tornado touched down in Virginia Beach for roughly 8 miles on Saturday, March 31. At least 12 homes are condemned and 32 people are displaced. I was in Virginia Beach this weekend visiting some friends and family (who were not affected by it) and they mentioned it and knew of people who had been affected by it. More than 200 homes total were damaged in some way by the storm. It is believed that 3 tornadoes total touched down in the area, but the one that did the most damage was the EF2. The others were both EF1 and mainly damaged or knocked down trees.

This is one of those situations where a natural hazard hits an area where it is not nearly as common as it is in other parts of the country. Tornadoes are known to hit the midwest United States, but rarely occur on the coasts. Most of the people in Virginia Beach probably have never even thought of a tornado as being a threat to their way of life. There are probably plenty of people who are aware of any and all hazards, but generally people in Virginia only think of maybe an EF0-1 tornado. This EF-2 tornado is relatively intense for what Virginians can be more prepared for. 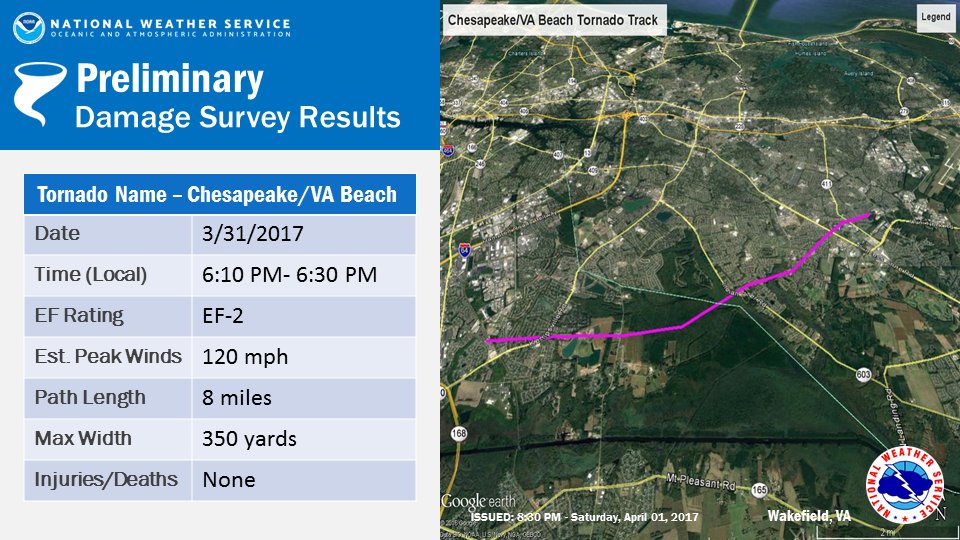 An image from NWS with the path of the tornado and other good information about it.

One thought on “Virginia Beach Tornado”