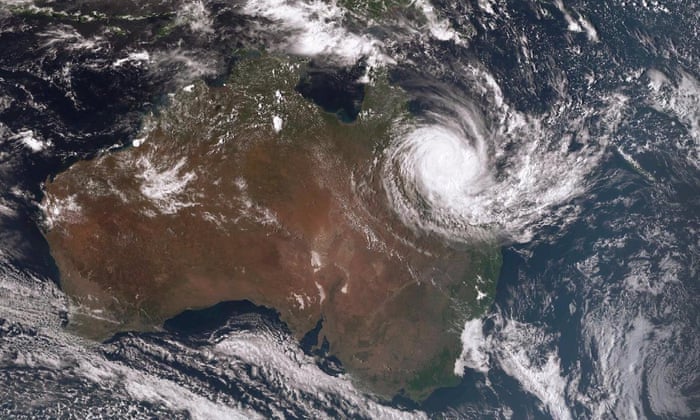 “The extent of injuries from Cyclone Debbie is yet to be determined as Queensland’s police commissioner warned people to prepare for the possibility of deaths after the category-four storm struck the eastern coast of Australia. The scale of destruction was yet to emerge on Tuesday evening amid reports of severe damage to homes and communities cut off from communications.”

The core of Cyclone Debbie hit the coast near Airlie Beach in Australia with winds up equaling 263 km/h (163mph). This slow moving cyclone has ripped roofs off of homes and has caused extreme damage to trees and plants in resident’s yards. There has also been reports of backyard grills “flying off”. There was a forced evacuation for low-lying areas on Monday prior to the storm making landfall. Of the 25,000 people told to evacuate, it is not clear how many did. “In Bowen, where much of the local housing was built before cyclone safety standards were introduced in the 1980s, the cyclone wrecked homes and caused “major environmental damage”, Whitsunday regional councillor Mike Brunker said.”

Not only are their disaster issues on land and environmental concerns, but there are also concerns in the Great Barrier Reef.

“Fontes said he expected Cyclone Debbie would be a mixed development for the Great Barrier Reef. Local coral would be damaged but the stir of water would cool sea-surface temperatures now causing mass bleaching across the broader reef. We’ve seen cyclone damage to the reef before and it is awful,” he said. “Locally it’s a disaster but reef-wide it’s a good thing – I guess that’s the best way to look at it.”