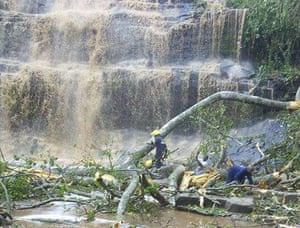 Up to 20 students are dead after a storm in Ghana caused trees to fall into a popular swimming spot. Wind and heavy rains caused by a storm resulted in large trees to fall and trap people in a pool at the bottom of the Kintampo Waterfalls. The Kintampo Waterfalls are some of the tallest in the Brong-Ahafo region of Ghana. The pool at the bottom of these waterfalls is a very popular tourist spot, and also a favorite of locals to swim and cool off. While on a trip to the northern regions of Ghana, 12 students of the Wenchi secondary school got trapped in the pool by falling tress and were killed. A spokesman for the national fire service, Prince Billy Anaglate, released a statement saying that 18 people died at the scene and an additional 2 people died in the hospital.

While storms would not regularly be considered disasters, this case just proves that they are still dangerous weather events and people need to be more cautious when storms are occurring. The students should not have been in the pool when it was raining to begin with, there are just too many factors that can go wrong during a storm. It is obvious that these students were too overzealous in thinking that it was just a storm and nothing more, weather is unpredictable, which is why it is so dangerous to ignore weather and to be callous in the face of potential disaster. This case is a perfect of example of people taking a disaster and turning it into a catastrophe, except that the careless overconfidence of the students and their teachers in this case caused a routine weather event to become a disaster. I can not help but think that this event could have been avoided, had someone just told the students to get out of the pool as soon as the rain started, and if not when the rain started at least when the winds started to pick up. Tragedies like these can be avoided if people just stopped ignoring the signs nature is providing them.