Posted by keeptalkinggreece in Very Mix

Three earthquakes with magnitude around and above 5 on the Richter scale shook the island of Lesvos in the Eastern Aegean Sea on Monday, February 6th 2017.

The epicenter of the earthquakes was located within the Turkish territory, about 34 km north of Mytilene, at a focal depth of 10 km.

*several geodynamic institutes give different magnitudes. The magnitudes of the earthquakes off Lesvos are from US and Greek earthquake observatories.

The succession of earthquakes began with a moderate tremor of 5.1 on the Richter scale in the early morning and a lighter 4.2-Richter magnitude quake at 13:45, as well as a series of 13 intervening aftershocks.

The phenomenon of three strong earthquakes have alerted Greek seismologists with some of them to believe that an old rift has been activated and a bigger earthquake was possible.

Seismology professor at the Aristotle University of Thessaloniki, Konstantinos Papazachos, expressed his concern about the activation of a rift 10 to 15km long north of Levos.

“When we have accumulated earthquakes this is an operative event for greater earthquake,” Papazachos told Skai TV on Tuesday morning. “What concerns me more is the fact that it is one of the main faults that historically have hit the island” he added recalling the powerful earthquake of 6.6R in 1865 that had caused damages in the north of the island.

Papazachos spoke of a “difficult” phenomenon in progress and stressed that such earthquakes do not diffuse the energy pressure.

The professor urged the local community to take preventive measures.

Seimsologist Giorgos Chouliaras said also the they were concerned about the ‘history’ of the said fault line.

Efthimios Lekkas, seismologist at the Athens University Geology and Geoenvironment Department, reassured the residents of the islands of Lesvos and Chios, that was also shaken by the tremors, that there was no cause for concern.

Lekkas said seismologists will be monitoring the phenomenon closely, however, since it is occurring in an area with several rifts, though not the very destructive Anatolia rift.

A period of 48 hours must pass before the phenomenon can be said to be fully completed, he added.

Tuesday morning, another earthquake of 5.2R magnitude shook the western province of Çanakkale, Turkish media reported adding that at least four people were injured on Monday. There were damages in eleven villages affected by the earthquakes on Monday. 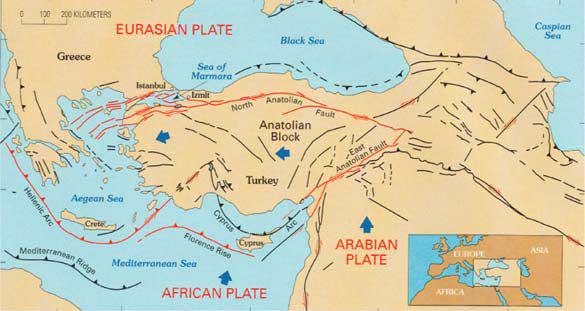 Fault lines in Turkey and Greece: the fault line north of Lesvos seems to be one of the side fault line of the North Anatolian Fault line that caused the powerful 7.4R in Izmit in 1999 killing thousands of people.

There is a high concentration of fault lines in northwestern Turkey, where the Eurasian and African plates meet; a few faults and ridges also appear under the Mediterranean.

It would seem the Aegean has gone through periods of seismic activity due to the tectonics discussed and also being a volcanic region. Hopefully this isn’t a bad omen with this marked increase in seismic activity  in the very recent past.